Kevin Hern (R-OK) is widely known as the McCongressman. 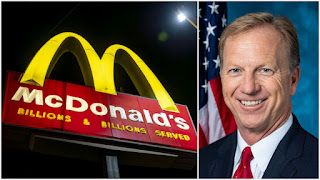 He owns 10 McDonald's franchises in and around the Tulsa area.  So it's no wonder he got an endorsement from the Orange Prolapse.  A few years ago, Hern wrote in an email to supporters...

Granted, that made me physically ill.  But it also served as the framework for the 2nd chapter of my infamous heavy metal cookbook Ketosis Psychosis.

White and young
Ivanka is fucked up


Burn The Witch
Queens Of The Stone Age

Bite your tongue
Swear to keep your mouth shut

Ask yourself
Will I burn in Hell?
Then write it down
And cast it in the well
There they are
The mob it cries for blood
To twist the tale
Into fire wood
Fan the flames
With a little lie
Then turn your cheek
Until the fire dies
The skin it peels
Like the truth, away
What it was
I will never say 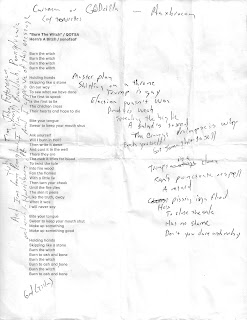 Not really a fan of this song.  Favorite QOTSA tune?  Plenty to choose from.  Just off the top of my head it's probably "Turnin' On The Screw."

About 20 years ago, I had a chance afternoon encounter with my buddy Sleeping Giant Sam in the Star Lake parking lot for Lollapalooza.  He introduced me to his new wife Skittle.  But they couldn't really talk because they were hurrying to get inside to see Queens of the Stone Age.  One of the greatest concert openers of all-time was playing in the background... You Think I Ain't Worth A Dollar, But I Feel Like A Millionaire."  I chose to skip the band and listen from the lot.  Tailgaters prerogative.

Queens Of The Stone Age:

Please do not share this material with Kevin Hern (R-OK) and/or former President Donald J. Trump.