I've been thinking about recreating one of those "baby Jesus" manger scenes.  You know, for the holiday season. 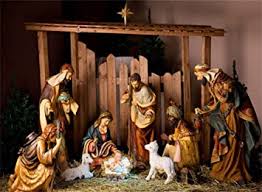 Except it would all be Trump characters.  Not sure who would play what role.

Baby Jesus?  Probably a miniature version of the Orange Prolapse

A baby lamb of some sort?  Sean Spicer

A donkey or ass?  Gotta go with Rudy Giuliani.

You git the gist.

You try at working out chaotic things
And why should I believe myself, not you?

It's like the world is gonna end so soon
And why should I believe myself?
My– 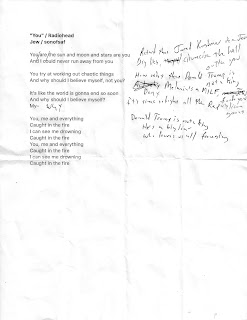 The last time Radiohead played this song live was 20 years ago.  They retired it in 2002.   Crazy to think how this band has evolved through the years.  Just a handful of bands I'd consider getting on an airplane to see.  Radiohead's one of 'em.  Dead & Company, maybe Pearl Jam, that's about it.

Please do not share this material with Jared Kushner, Ivanka Kushner and/or Jews.