The Orange Prolapse issued one of his glorious endorsements last week.  This one went out to Eli Crane.

Eli Crane is running for Congress in the Great State of Arizona.  Eli is a retired Navy SEAL and successful businessman who proudly served and loves our incredible, but seriously under siege, Country.  Eli will Fight for Election Integrity, Secure the Border, Support our Military and Vets, and Defend the Second Amendment.

With Eli as the Republican Nominee, we will defeat Democrat Tom O'Halleran, a puppet of Nancy Pelosi, who is weak on Borders, the Second Amendment, Election Integrity, and is a disgrace to the people of Arizona.  Eli Crane has my Complete and Total Endorsement!

Crane's in a crowded Republican primary with 7 other candidates.  So I imagine that Trump's fat ass weighing in will likely put him over the top. 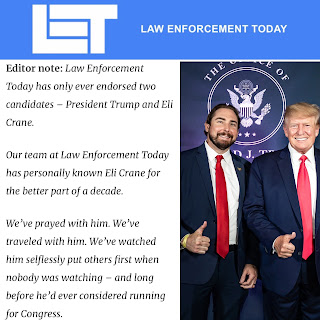 I don't read Law Enforcement Today.  However, it does seem peculiar that their periodical has only ever endorsed two politicians.  One of them being Cadet Bone Spurs, a 4 time draft dodger who delighted in the 1-6 attack which resulted in a trail of dead and maimed Capitol police officers.

I've said it before and I'll say it again.  More human beings (cops, politicians, female minorities, etc.) will need to suffer in order to rectify the rectum of Trump.  January 6th was just the beginning.

Not nearly enough innocent people have been killed or injured to satisfy Trump's ego and political ambitions.

Stormy gave him head and you know it’s true
‘Cause MAGA’s dead and Kushner’s a Jew
The Donald makes us scream pretend to defend
His asshole’s obscene, butt

Stormy gave him head and that’s pretty sad
‘Cause MAGA’s dead and fake news is bad
The Donald makes us scream pretend to defend
His asshole’s obscene, butt


I Can't Explain
The Who

Dizzy in the head and I'm feeling blue
The things you've said, well, maybe they're true
I'm gettin' funny dreams again and again
I know what it means, but Saf, what's your favorite Who song?

Please do not share this material with Eli Crane and/or former President Donald J. Trump.