Big MAGA rally tonight in Prescott Valley, AZ!  Butt just before the Orange Prolapse hits the stage, one of his opening acts will be right wing extremist Blake Masters.  That Blake, that strapping young lad, is running for U.S. Senate.

Masters is very anti-gay.  He wants to overturn the recent Supreme Court's ruling that paved the way for legalizing gay marriage.  He also believes that gays and lesbians should not be allowed to raise children and have a family.  Which is kind of ironic.  Because his biggest donor, and political sugar daddy, is mega-billionaire Peter Theil.  And guess what?  Theil just happens to be gay.  In 2017, his husband Matt Danzeison brought some baggage to their relationship in the form of a daughter... Elanor Kristina.

Just don't ask Blake Masters about any of this gay shit.  For the love of Prince!

Blake Will Fuck You
sonofsaf


Take Me With U
Prince

Come on and touch the place in me
That's calling out your name
We want each other oh so much
Why must we play this game?

To be around u is so-oh right
You're sheer perfection (thank u)
Drive me crazy, drive me all night
Just don't break up the connection 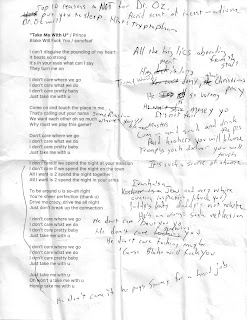 So which Prince album was better?  1999 or Purple Rain?  Gotta go with the latter.  I'd definitely put it in my Top 10 studio albums all-time.

Please do not share this material with Blake Masters and/or former President Donald J. Trump.