will take on Democrat Daryl Scott... 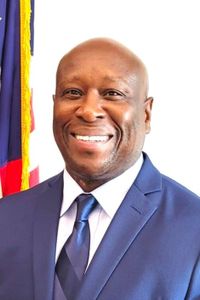 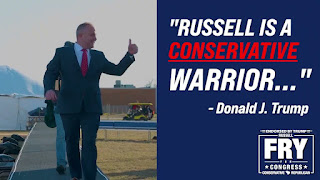 Well, every once in a while, the Orange Prolapse and I actually agree on something.  Because Russell Fry  puts the cunt in conservative and the whore in warrior.  He's your typical Southern rural Trump stooge.

If I was Scott, I'd engage Fry in the upcoming debate on the subject of racism and lynching.  Historically speaking, blacks in the South were lynched and tortured.  That's a fact.  Now my opponent across the aisle actually supports the modern day lynching of white people as well.  Does anyone remember the gallows on 1-6 and the chants of "Hang Mike Pence?"  My opponent, in his twisted desire to suck up to Donald Trump, has become the new face of torture and killing.  He obviously thinks the noose and gallows were justified.  He doesn't even have the courage to condemn such behavior.  He's unwilling to speak out on the attempted murder of the Vice President.  Why would South Carolina voters elect such a pathetic, disgraceful, disgusting, loathsome coward?

If the voters elect me, I promise to run on an anti-lynching platform.

Hell, at a bare minimum, it'd make for one helluva viral sound-byte.

Fry Is A Whore
sonofsaf

Russell’s a whore who cannot abstain
He’s never kind fucks you all
A far right man a flood of blood
Go to hell cast a pall
White supremacy, McDonald’s chickens
Pink slime nugget shit stains
Endless tirades, what you deserve
All of his turds sewage stored

Donald Trumpers like to cuss
While there is no more winning
Asshole it gapes the Orange Prolapse man
And his wife on a toilet she shits
The big lie, you are dumb
Selling it never give
Only the dead do not ask why
And MAGA you will feel

Die By The Sword
Slayer

Live by the sword and help to contain
The helpless minds of you all
Die by my hand in pools of blood
Clutch yourself as you fall
Mindless tyranny, forgotten victims
Children slaughtered in vain
Raping the maids, in which they serve
Only the words of the Lord

Satan watches all of us
Smiles as some do his bidding
Try to escape the grasp of my hand
And your life will no longer exist
Hear our cry, save us from
The Hell in which we live
We turn our heads toward the sky
And listen for the steel 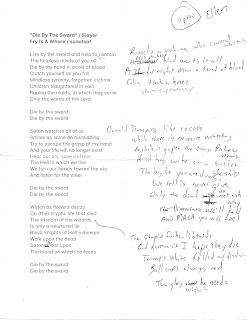 Please do not share this information with Russell Fry (R-SC) and/or former President Donald J. Trump.