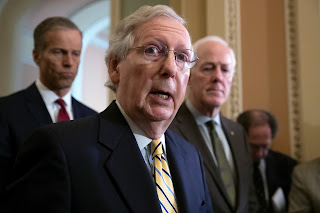 It makes me wonder who would take over for Minority Mitch?  Senator John Thune (R-SD) or Senator John Cornyn (R-TX)?  For the love of all that is toiletry, that could make for the ultimate pay-per-view event.  A political battle of the Port-a-John's.

Interestingly enough, the Orange Prolapse despises Thune.  Because back in 2016, he tweeted for Trump to abandon his presidential campaign after the "grab 'em by the pussy" ordeal.

However, in the past, Donald Trump has endorsed Cornyn.  Likely just an attempt to bolster his coveted win/loss percentage.  Whatever the case, I think it's relatively obvious that when Cornyn appears to be the least bit chummy with Mitch McConnell... it has gotta infuriate the hell outta Trump.  Hey, how could it not?  Think about who you're dealing with.  #RINOCOMPLEX

Watchin’ how the news fakes
Sharin’ all the big lies
‘Cause Jesus Christ for god sakes
Why is he outta line
Trump’s wet dream is Stormy
A Big Mac should be deep fried
That coup d’etat’s for me
Hey, the insurrection was not a crime

Thorn In My Pride
Black Crowes

Wake me when the day breaks
Show me how the sun shines
Tell me about your heartaches
Who could be so unkind?
Do you dream to touch me?
And smile down deep inside
Or could you just kill me?
Hey, it's hard to make up your mind sometimes.

Are you wanting inspiration?
You spill your secrets on me
Then you tell me with a whisper
Of things that will never be.
Do you hear me breathing?
Does it make you want to scream?
Did you ever like a bad dream?
Sometimes life is obscene.

Thorn in my pride 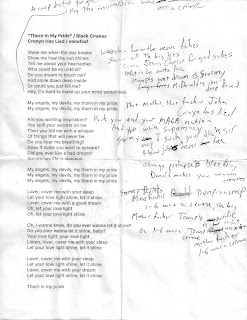 I have mixed emotions about the Black Crowes.  Some of their music is simply a generic Southern drag.  While some of their other material totally mesmerizes.  You just never really know exactly what you're gonna git.

So who would I rather see?  The Black Crowes or CRB?

Again, hypothetically?  Now that... is a tough one.  It'd probably depend on the venue and my general mood at the time.

Please do not share this material with Senator John Cornyn (R-TX) and/or former President Donald J. Trump.  Thune too.