Good news out of the Republican party.  If you were ever in search of a political oxymoron... Governor Larry Hogan (R-MD), a relatively normal human being, just announced that he will not be supporting right wing extremist, Trump sycophant, and all-around nut job Dan Cox.

He’ll always defend the insurrection
Libtards his enemy
Yes, Maryland calls him a dumb cunt
A MAGA treat for all to see


She Talks To Angels
Black Crowes

She never mentions the word "addiction"
In certain company
Yes, she'll tell you she's an orphan
After you meet her family

She paints her eyes as black as night now
Pulls those shades down tight
Yeah, she gives a smile when the pain come
The pain gonna make everything alright

She keeps a lock of hair in her pocket
She wears a cross around her neck
Yes, the hair is from a little boy
And the cross is someone she has not met
Not yet

She don't know no lover
None that I ever seen
Yeah, to her that ain't nothin'
But to me, yeah, me
Means everything

She paints her eyes as black as night now
She pulls those shades down tight
Oh, yeah, there's a smile when the pain comes
The pain gonna make everything alright
Alright, yeah, heah 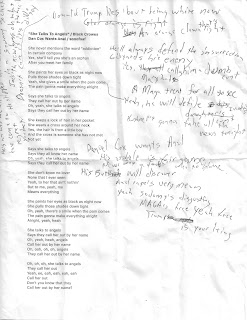 Since 1990, the Black Crowes have played the Burgh 18 times.

Please do not share this material with Dan Cox and/or former President Donald J. Trump.