Here's Walker explaining his thoughts on climate change and the Green New Deal...

“We in America have some of the cleanest air and cleanest water of anybody in the world.

Under the Green New Deal, the U.S would spend “millions of billions of dollars cleaning our good air up.  Since we don’t control the air, our good air decided to float over to China’s bad air so when China gets our good air, their bad air got to move.  So it moves over to our good air space.  Then now we got to clean that back up, while they’re messing ours up.”

“So what we’re doing is just spending money.  Until these other countries can get on board and clean what they got up, it ain’t going to help us to start cleaning our stuff up.  We’re already doing it the right way.”

Hopefully not an eco-visionary most voters would seemingly identify with.  Then again, he's a Trumper.

He never thought they’d expose his baby’s mother
He only wanted that bullshit dog’s rear end
Baby, try to screw the Dems and you’ll discover
Donald Trump’s a piece of shit he'll defend

I only want to see you bathing in the purple rain

I never wanted to be your weekend lover
I only wanted to be some kind of friend
Baby, I could never steal you from another
It's such a shame our friendship had to end

I only want to see you underneath the purple rain

Honey I know, I know, I know times are changing
It's time we all reach out for something new
That means you too
You say you want a leader
But you can't seem to make up your mind
I think you better close it
And let me guide you to the purple rain

If you know what I'm singing about up here
C'mon, raise your hand 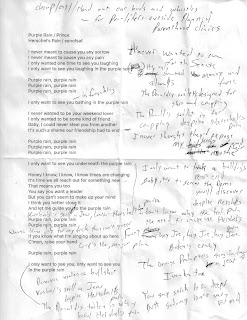 In a single, over-utilized word... epic.

Please do not share this material with Herschel Walker and/or former President Donald J. Trump.