Trump recently endorsed Janae Shamp (whoever the fuck that is) for Arizona State Senate.

"Janae Shamp, who was spurred to action by the Rigged and Stolen 2020 Presidential election, is running for the Arizona State Senate. Janae is not a politician - she's a registered nurse, a Patriot, and MAGA through and through. Janae will defeat the RINO's and the Radical Left, will fight to restore our Border, which was the strongest ever and is now the weakest ever, make our schools great again, will stop unconstitutional mandates, and will always put America, and Arizona, FIRST.

Her opponent, Joanne Osborne, is a RINO disaster, who is being pushed by pathetic Arizona governor, Doug Ducey, who has allowed so many bad things to happen to the State, like Jeff "Flakey" Flake, is on her side, and that's all you have to know. Early voting starts today, and election day is August 2nd. Vote for Janae Shamp in Arizona State Senate District 29. She will not let you down and has my Complete and Total Endorsement!" 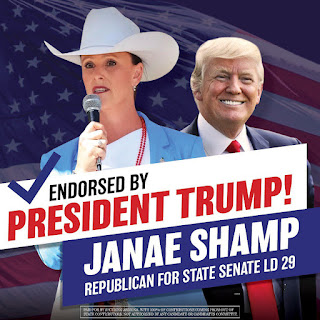 Dear fucking god!  Keep in mind, this is her campaign's photo-shopped image.  If you look up the term "cowboy retard dynamic duo" in the Miriam Webster Dictionary...

Seriously, that photo's just a really bad joke.  Even by Orange Prolapse standards.

Janae Is A Shamp
sonofsaf

Trump spreads big lies son-in-law’s a Jew
Loves Erdogan in Turkey
What a bitch he whines and fucks with you
Disdain and pure misery
An ass, he’s pissed as MAGA stalls, for him that’s very bad
Trump’s appetite is so hearty for McDonald’s and Big Macs
Because he didn’t win a victory
That ho Melania’s cunt was never free

Trump’s very hungry, but filled up with hate
Trump fucked her in the rear, on a Stormy date
Trump’s a bad father and there’s no debate
It’s why that Janae is a Shamp

Daughter-wife’s a shame, son Barron’s a girl
He’s such a problem, grabs pussies of girls
Orange Prolapse flirts, with U.S. flag unfurled
It’s why that Janae is a Shamp

Trump’s about me, he’ll sin he don’t care
‘Cause he won’t share
A joke, and he’s so gay
He loves Mar-A-Lago, and Ivanka’s a tramp
It’s why that Janae is a Shamp

Trump’s about me, he’ll sin he don’t care
‘Cause he won’t share
A joke, and he’s so gay
He loves Mar-A-Lago, and Ivanka’s a tramp
It’s why that Janae is a Shamp

It’s why that Janae is a Shamp


Lady Is A Tramp
Tony Bennett

She wined and dined on mulligan stew
And never wished for turkey
As she hitched and hiked and grifted too
From Maine to Albuquerque
Alas, she missed the Beaux Arts Ball, and what is twice as sad
I was never at a party where they honored Noel Ca-ad (Coward)
But social circles spin too fast to see
The "hobohemia" is the place to be

She gets too hungry, for dinner at eight
She likes the theater, but never comes late
She never bothers, with people she hates
That's why the lady is a tramp

She won’t like crap games, with barons or earls
Won't go to Harlem, in ermine and pearls
Won't dish the dirt, with the rest of the girls
That's why the lady is a tramp

She likes the free, fresh wind in her hair
Life without care
She's broke, and it's o’k
She hates California, it's cold and it's damp
That's why the lady is a tramp

She loves the free, fresh wind in her hair
Life without care
She's broke, it's o’k
She hates California, it's cold and it's damp
That's why the lady is a tramp

That's why the lady is a tramp 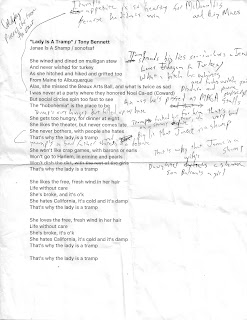 Challenging parody as is often the case with rambling narrated lyrics.

Lady Gaga has been here a total of 5 times.  Never seen either of 'em.

Please do not share this material with Janae Shamp and/or former President Donald J. Trump.