Renegade beardo Jack Dorsey stepped down from his position of CEO of Twitter.  With a net worth of 11.5 billion, I'm guessing he'll still be able to afford his insulin.  Maybe even buy a new nose ring. 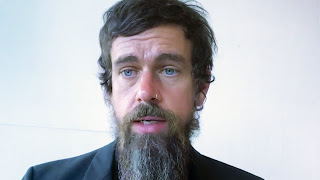 I've used twitter just once.  About 15 years ago I sent out a tweet that said "test."  I do faithfully check the tweets of two individuals.  My wife and the Super Genius Mark Madden.  But that's about it.  Before he got kicked off twitter for essentially creating an artificially generated stampede that left several dead and 100+ injured, I would routinely check the tweets of the Orange Prolapse.

Jack Dorsey’s done with the twitter tweet
Jag-off instead and wasn’t discreet
Well, he’d go online and pray
Denyin’ that he’s gay
When he is just a ding-a-ling
The Orange Prolapse a sight to behold
But Trump’s no longer tweeting, from what I’ve been told
‘Cause we know he don’t belong
He’s like an orange King Kong
Donald Trump thought that he was a king

Down in defeat Joe Biden made his case
Trump’s wife is a whore, with a constipated face
Donald why did you not win
Was it because you sinned
Trump thinks he is a god damn king
Make America Great Again’s the plan
Oath Keepers and the Proud Boys insurrection fans
Trump’s the Orange Prolapse clown
Maybe syndrome of the down
And he thinks he is a go damn king

But this song is gonna keep grooving
Forty five is the essence of losing
'Cause he's trolling, he's trolling alone
He makes me throw up, and be vomiting
He’s always whining, never vomiting
And he’s Mar-a , Mar-A-Lago

Winding your way down on Baker Street
Light in your head and dead on your feet
Well, another crazy day
You'll drink the night away
And forget about everything
This city desert makes you feel so cold
It's got so many people, but it's got no soul
And it's taken you so long
To find out you were wrong
When you thought it held everything

Way down the street there's a light in his place
He opens the door, he's got that look on his face
And he asks you where you've been
You tell him who you've seen
And you talk about anything
He's got this dream about buying some land
He's gonna give up the booze and the one-night stands
And then he'll settle down
In some quiet little town
And forget about everything Great tune.  Never seen Gerry Rafferty.  Passed away in 2011.  Never played the Burgh.  To the best of my knowledge, he never toured the States.  Only a handful of dates in Europe.