I'm not one to play amateur psychologist here.  But Jim Jordan obviously feels a sense of comfort while reminiscing about his time at Ohio State.  You know, when he served to honorably facilitate countless acts of sodomy.  When male college wrestlers would hit the showers.  Basically, it's the Ohio version of Penn State's Jerry Sandusky.  The victims were just a little older and sweatier.

Crazy how this pervert was in line to potentially become Speaker of the House.  Then again, for many in the Republican party, it's almost kind of a "sexually schizophrenic" rallying cry.  Why?  Because so many are closet faggots.

The big lie’s a bluff.
An obvious bluff.
Did Dems call your bluff?
Trump sickens you and me

The big lie’s a bluff.
An obvious bluff.
Did Dems call your bluff?
Trump sickens you and me

He’ll fuck ya
Is there any doubt
Without meat
Any doubt
A Congressional seat
Not any doubt, any doubt
Any doubt complicity, yeah

He’s a shithead, he will fuck it up
Sickens you and me
Jim needs to get off
Will Jim sing?  Maybe
About the big lie plan
Trump is fucking you and me
He’s doin’ all he can

The big lie’s a bluff.  Ooh, money
An obvious bluff.
Did Dems call your bluff? About that stuff.
Ooh, please

All your sickness, I can suck it up
Throw it all at me
I can shrug it off
There's one thing, baby
I don't understand
You keep on telling me
I ain't your kind of man

I'll never be your beast of burden
I've walked for miles, my feet are hurting
All I want is you to make love to me
Yeah 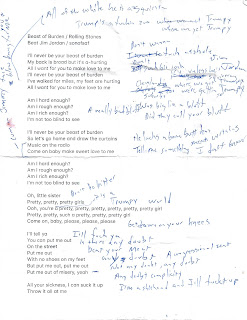 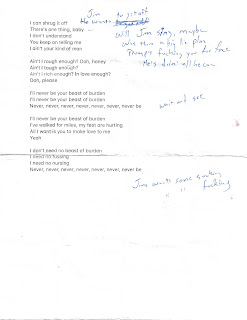 Please do not share this material with Jim Jordan (R-OH) and/or former President Donald J. Trump.