There's a big "Save America" rally in D.C. cuming up on September 18, 2021.  It's called Justice for Gay Pricks.  After all, we must protect and defend the Trumper faggots who accidentally got "caught up" in the hysteria of the big lie.  It wasn't their fault dag-gum it.

What most people fail to realize is that there are an additional 17 rallies at State Capitols being hyped for the same day.  In states as red as Wyoming.  And states as blue as Massachusetts.  And of course, many of the swingers: Georgia, Arizona, Colorado, Iowa, North Carolina.

I suspect the DC rally will be a major bust.  They're anticipating a crowd of less than 1,000 caged imbeciles.  However, it's difficult to gauge what might happen in all of these other cities.  Way too many variables in play.

Braynard is making a personal appeal to all rally-goers.  Only wear red, white, and blue.  No Trump gear.  Apparently, Braynard believes there's the possibility or likelihood of violence.  And he doesn't want the stain of the Orange Prolapse to be exposed yet again.  Yeah, good luck with that.

If you plan on attending, feel free to make a hundred copies of the flyer below.  "Orange Prolapse 2024" made it's regional debut at last week's Dead & Company show in Cuyahoga Falls, OH.  Great concert.  Long ride home. 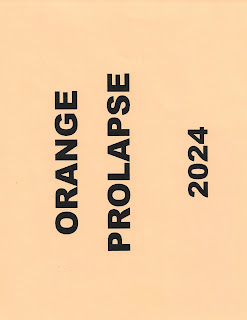 Here's a thought.  If you're a network commentator, may I suggest throwing out the notion that... Donald Trump, his punk kids, Rudy Guiliani, the My Pillow Fuck, Mo Brooks (R-AL), Phil Gosar (R-AZ) and anyone else who played a significant leadership role with instigating the domestic terrorist attack on January 6... be placed on the FBI's "no-fly" list.  This secretive list is purported to have somewhere in the realm of 50,000 - 100,000 on it.  What purpose does it serve if you can't include those responsible for inciting a domestic terrorist incident and trying to overthrow the United States government?

If Trump feels so passionately about holding a rally in Des Moines, Iowa, let the piece of shit drive there.  Label me a cynic, but if Trump had to spend a day or two on the road, all of these patriotic rallies would suddenly cease to exist.  Or only occur in South Florida.

At a bare minimum, just introduce the premise that after what transpired on January 6, Trump and his ring leaders should not be afforded the privilege and convenience of air travel.  I honestly can't understand why nobody's jumped on this.  Especially after that video of Paint Face Giuliani shaving his ball sack surfaced from LaGuardia.

Truth be told, the idea has merit.  But regrettably, not nearly enough important people were killed or injured for there to be the necessary government inertia.  A handful of dead cops and a 100+ PTSD cases just ain't enough.  It's not even close.  Maybe after the next riot(s).

Please do not share this material with former President Donald J. Trump and/or Look Ahead America Director Matt Braynard.