Fox News superstar and Trump sycophant Sean Parnell lives about 10 minutes up the road from me in Cranberry.  Truth be told, I wouldn't drive up 279N to piss on the guy... even if he was on fire.  However, I would bug him about my evac protocol/stampede shit.  Perhaps if we have a chance encounter.

Dumbshit slogans like "Win Pennsylvania, Save America" are the new Trumpian norm.  Oh, I get it.  See... if you win a guaranteed red state, or in certain cases, a swing state relying heavily on new voter suppression laws (Florida, Ohio, etc.), then you get to rescue, protect and/or save the country.  How inventive.  Cue the Lee Greenwood.

You fought for the U.S. in Afghanistan
But now you are a fucking dick

You fought for the U.S. in Afghanistan
But now you are a fucking dick

For criminal acts and violence on the stage
For being a brat, refusing to act your age
For all of the decent citizens you've enraged
You can go to Hell

For criminal acts and violence on the stage
For being a brat, refusing to act your age
For all of the decent citizens you've enraged
You can go to hell 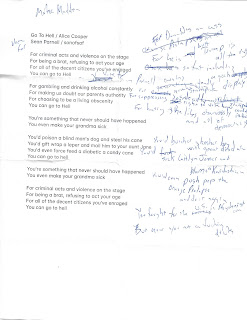 Sean Parnell was brave enough to serve his country, but just like Trump refusing to admit he lost to Biden, he lacked the simple courage to concede an election.  Sad!  In the case of Trump, political mimicry is the highest form of flattery.  Parnell's basically a "Trumpycat"... the political version of a copycat.  If you win, you cry and bitch how the margin wasn't wide enough.  And if you lose, you cry and bitch and say the election was rigged.  That you got robbed.  See?  This way, you win every time.  Brilliant.  Gotta wonder why nobody has ever tested this tragedy.  Hint: it's about words you'd think a military veteran would be familiar with.  Duty.  Honor.  Dignity.  Patriotism.

If I was a local reporter, I'd ask Parnell point blank, "Sean... Donald Trump claims that your opponent Conor Lamb stole your seat in the House of Representatives.  Mr. Parnell... did you win or did you lose in 2020 ?  Yes or no.  Were you the winner or the loser?  And if there's a statewide rematch for Senate, how much of a point loss would it take for you to admit defeat?  A loss by 2 points?  5 points?  10 points?  Does any circumstance exist where you'd be willing to concede the race?  Or will you just pull a Trumpycat?