You gotta love how she terminates the interview but then returns with the cute 'lil doggie as part of a calculated, transitional photo-op.  The dog obviously did not wish to be sitting on Sidney's lap.  I kinda wonder if the dog even belongs to her.  Would have been amusing if the reporter asked, "Oh, what's your dog's name?"... and she stammered unknowingly, "uh, I'm not sure that's entirely relevant to this particular interview."

Dear god, that voice is the equivalent of chewing on tin foil.

Eleanor Rigby
Picks up the rice in the church where a wedding has been
Lives in a dream
Waits at the window
Wearing the face that she keeps in a jar by the door
Who is it for?

Father McKenzie
Writing the words of a sermon that no one will hear
No one comes near
Look at him working
Darning his socks in the night when there's nobody there
What does he care? 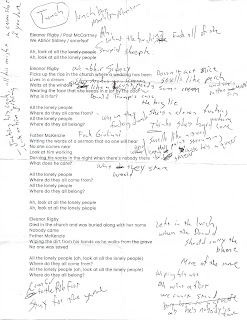 Please do not share this material with Donald Trump's former attorney Sidney Powell.