He’s urinary
And Trump’s so morbidly fat
Butt plenty cruel, ha!
He knows where it’s at

Donald’s queer, maybe
and he’s so fucking lazy
Used to tweet from his phone,
But he didn’t learn,
Just wait and see what a big fat turd

You know Trump thinks that he’s funny
But his jokes are shit, babe
Jokin’ the Orange Prolapse way

You don't care for me
I don'-a care about that
Gotta new fool, ha!
I like it like that

Listen here, baby
and stop acting so crazy
You say your mum ain't home,
it ain't my concern,
Just play with me and you won't get burned

You try to gimme your money
you better save it, babe
Save it for your rainy day 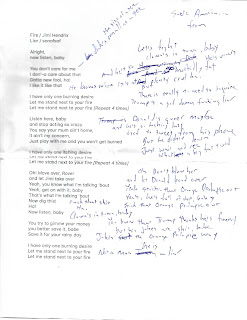 I obviously never got to see Jimi Hendrix in concert.  So let's use Phish.  Seen them plenty.  Or at a bare minimum, a suphishient number of times.

Jimi Hendrix died at the age of 27 in the fall of 1970 at a hotel in merry 'ol England.  He choked on his own vomit after an overdose of drugs and alcohol.  His death came about a month after I was born.  Let me assure the blogosphere that I had nothing to do with Jimi's untimely demise.  Discernible evidence exists that I'm innocent.  As we were physically separated by the Atlantic Ocean.  At the time, I was residing in Wheeling, WV.

Though allow me to be forthright... it is possible to kill and injure innocent people, without conventional weaponry, on different continents via the induction of a dominipede (multiple, simultaneous artificially generated stampedes).  Especially when you take into account the degree of lingering Covid paranoia in large confined crowds.  But when it comes to an NFL game at Wembley Stadium, I just don't see it happening this year.  The most obvious target date would be Sunday, October 3, 2021. (9 simultaneous NFL games along with 15 MLB games around 3pm).  Conceivably 24 simultaneous unannounced panic-induced self-evacuations.  But Wembley wouldn't enter into the equation.  Although I do think it's reasonable to throw in the afternoon NASCAR race in Talladega, Alabama.  Trump country!