Trump had one of his Save America rallies over the weekend.  Held at some rural county fairground in scary Perry, Georgia.  He even floated the idea that a black, liberal Stacey Abrams "might very well" make a better governor than Brian Kemp (R-GA).  After all, Kemp refused to tow/hold the line... and go along with the big lie.

Someone really needs to come up with a term for that tiny crew of black dudes who stand directly behind Trump.  Maybe NWT (Niggas with Trumpitude)?  Trump Suckas?  Negro Numbskulls?  Black Bizatches?

So this is a new one.  Even for the Orange Prolapse.  Trump is now pretending to be overly consumed by his own sense of imaginary betrayal.  So much so that he'd be willing to float the notion of actually supporting an evil Democrat.  All with the express intent of exacting revenge on any Republican who won't kiss the ring (the one in the center of his ass).

Now that is cult-like hero worship taken to the next level!

Why is he so dumb?
We can’t defend
Jobs he has to blow
Cock in gay ass won’t bend

What have I become?
My sweetest friend
Everyone I know
Goes away in the end
You could have it all
My empire of dirt
I will let you down
I will make you hurt

What have I become?
My sweetest friend
Everyone I know
Goes away in the end 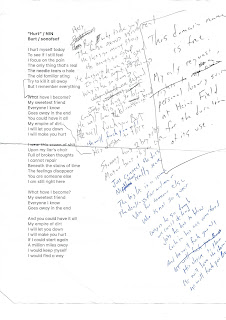