The number of successful organ transplants took a steep decline in 2020 and 2021.  Why?  Mostly due to our nation's hospitals being flooded by the selfish imbeciles who refuse to get the Covid vaccine.  Hmm, another great way to use disinformation as a way to kill people without conventional weapons.  Via the denial of healthcare and vital medical procedures.

Let's see here.  You can get a heart transplant.  A lung transplant.  Liver, pancreas, etc.  But the most commonly transplanted organ is the kidney.

In related news, the urban dictionary just released a list of new slang terms for 2021.  "Sadfishing" is my fav.  All those people who post distressing one liners in a desperate attempt to get a response.  "So lonely", "why me"... you know, shit like that.

But now there's a new term.  It's designated for lawyers who deliberately tell bold faced lies.  Of course, not in a court of law where they could actually be sanctioned or disciplined.  It specifically applies to the unethical grandstanders who go on FOX News or intentionally take soft interviews where they can more freely spout nonsense.

The term is "Sidney Implants."  Saf, please use it in a sentence.

Judge:  Do not stand before me and utter these bold-faced lies.  I'm holding you in contempt of court for those absurdly disproportionate Sidney implants.

It's based on the Orange Prolapse's attorney Sidney Powell and her ludicrous fabrications regarding the 2020 presidential election.  The notion of Powell sanctimoniously fabricating lies and espousing them to the general public.  While simultaneously strutting her stuff on national television.  The fake tits serve as an easy, convenient distraction from the truth.  As if anyone would ever wish to see that stoic, albino cunt naked.  Geesh. 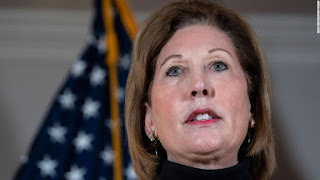 Powell's best defense these days is... "well, uh, you'd have to be a complete idiot if you believed the lies I was belching out."  What a fucking boob job!

Please do not share this material with ex-Trump lawyer Sidney Powell.