And it's part of the Big Lie series to boot!

One of my better parodies if I don't say so myself.

Trump’s an Orange Prolapse shit stain
Fucked up our nation, Lord
And his wife truly blows
A urinary fountain
Yeah, a yellow fountain
Get off, Ivanka’s job to blow

Say what can you see
Glory hole in the wall
Anonymous just don’t ask why
Cum’s like gravy, now
Trump’s always wantin’ more
And it’s called the big lie

Gonna take me a freight train
Down at the station, Lord
I don't care where it goes
I'm gonna climb a mountain
Yeah, the highest mountain
Jump off, nobody gonna know

I'm gonna find me
A hole in the wall
I'm gonna crawl inside and die
'Cause my lady, now
A mean ol' woman, Lord
Never told me goodbye

I'm gonna buy a ticket, now
As far as I can
Ain't a-never comin' back
Ride me a southbound
All the way to Georgia, now
Till the train, it run out of track 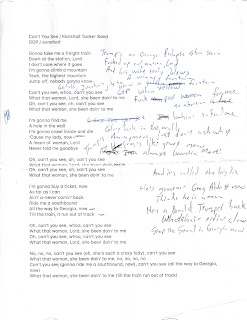 Saf, have you ever seen the Marshall Tucker Band?  Hmm, I honestly don't know.  They may have played a Jambo or slipped into one of those Star Lake country rodeo round ups... and I was either too drunk, totally indifferent, or relatively oblivious.

Never thought much about this song until I saw the scene from Blow starring Johnny Depp.  Great movie.  I'd put it in my top 10 - 20 range along Donnie Brasco.  Love J. Depp.

If I was a high profile individual running for high office in a swing state (Hint: John Fetterman), I would rebrand the term "critical race theory" as "critical rape theory."  It doesn't take a James Carvillesque political strategist to realize that the new Texas abortion law... is a flat-out loser.  I'd also portray Texas Governor Greg Abbott and his Lt. Governor Dan Patrick as crazed imbeciles who think rapists should be allowed to sue their victims for 10K.

Also, in light of the recent Uber/Lyft narrative, I'd speculate that commercial airline pilots in Dallas, Houston, San Antonio, etc., will soon be required by law, to interrogate all female passengers, and provide physical evidence of a negative pregnancy test before boarding.  Similar to the Covid vaccine passport concept.  After all, airplane pilots could be held liable as well for aiding and abetting a "hypothetical" abortion.

Who would've thought, that in 2022, the abortion litmus test would resurface (especially with no exceptions for cases of rape and incest)?  Along with the big lie and critical rape theory, my advice to the entire Democratic party... LEAN INTO IT.  Trump magnified the Republican culture war and he lost.  With the exception of maybe West Virginia or Alabama, racism and the overall culture war is a total loser issue.  LEAN INTO IT.

Please do not share this material with former President Donald J. Trump, Ivanka Trump, Governor Greg Abbott (R-TX), any female seeking an abortion in the state of Texas, and/or anyone who identifies with the Grand 'Ol Party.