Saf, no offense, but that doesn't sound like something you would say.  And you'd be correct.

It's a pinned tweet from Jenna Ellis, an integral part of the Orange Prolapse's sketchy legal team. 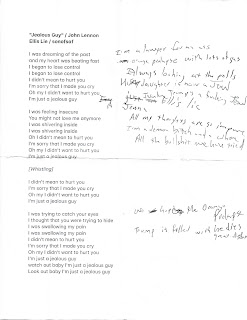 You gotta wonder why someone would kill John Lennon.  Out of everyone out there, why him?  Turns out that Mark David Chapman was seeking instant celebrity status.  He just wanted to be famous.  Hey, maybe that asshole was merely ahead of his time.  His particular crime, shooting Lennon in the back 4 times, seems better suited for 2020... and beyond.

Please do not share this material with former President Donald J. Trump and his Christian lawyer Jenna Ellis.