Mason and I went to our first movie since Covid hit.  First time in the Mount Lebanaon Galleria.  Nice place.  But I really don't care for the snarling, disjointed traffic of South Hills.  Never have.  Yellow Belt my ass. 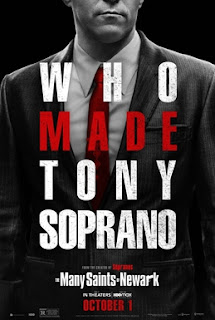 Great story lines --- learning that Dickie Multisanti killed his father and drowned his wife.  Didn't see that coming.  And it was Uncle Junior who ordered the hit on Dickie Multisanti?  WTF!

Also liked the subtle references to Holstens and Bamberger's.

I enjoyed the exploration and portrayal of racial tensions in Newark back in the late 60's.  Great underlying theme.

Thought the characters were fantastic.  Although the mannerisms of a young Silvio seemed a bit excessive.  Uncle Jew was spot-on... your sister's cunt.  Saw the bullet going through Livia's beehive hairdo coming a mile away... oh, go on.  James Gandolfini's son was exceptional.  Although I was hoping they'd do a flashback of Tony and "his crew" taking down Feech LaMana's card game.  Also thought they'd show the murder of the bookie Willie Overalls.  Perhaps in a sequel.

But the ultimate test for any movie is would I watch it again.  The answer being yes.  But I wouldn't go out of my way.  I'll wait for it to show up on the HBO channels.  Keep in mind, The Sopranos is easily hands down my favorite dramatic series of all-time.  Nothing else even comes close.

A strategic warning, Donald Trump ain’t done
He’ll be spreading election lies just for fun
He says, "I am not done killing, the riot was just fine
You just gotta keep holding that line and keep tellin’ those big lies"

A strategic warning, more blood yet to come
The Donald wants to fuck you with a loaded gun
Not misunderstood, maybe, all Trump does is bitch and whine
(Fuckin’ bullshit)
You gotta hold that line and keep tellin’ those big lies

A strategic warning, from the orange prolapsin’ clown
Thinks it’s all a game handin’ out nervous breakdowns
Because he’s not done killing, it’s insurrection time
You gotta hold that line and keep tellin’ those big lies

You woke up this morning, got yourself a gun
Mama always said you'd be the chosen one
She said, "You're one in a million, you've got to burn to shine
But you were born under a bad sign with a blue moon in your eyes"

You woke up this morning, all the love has gone
Your papa never told you about right and wrong
But you're looking good, baby, I believe you're feeling fine
(Shame about it)
Born under a bad sign with a blue moon in your eyes

You woke up this morning, the world turned upside down
Thing's ain't been the same since the blues walked into town
But you're one in a million, you've got that shotgun shine
Born under a bad sign with a blue moon in your eyes 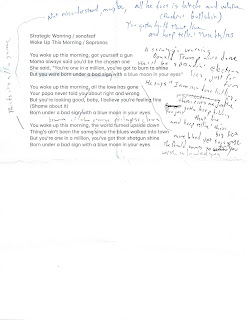 Please do not share this material with any cast members of The Many Saints of Newark, The Sopranos, and/or former President Donald J. Trump.