Mike Pence has been hitting up the campaign trail ahead of 2024.  Iowa, New Hampshire, South Carolina, all the traditional states.  Kinda makes you wonder... who the fuck really wants to hear this obsequious lickspittle actually give a speech.  He might possibly be the most disingenuous politician of my lifetime.  At least with Trump, most sane individuals know he's blatantly lying through his teeth.  But with Pence, he's just this shallow, hollow shell of a toad.  Seriously.  Find me someone who's worse.  I suppose you could make a case for Ted Cruz. 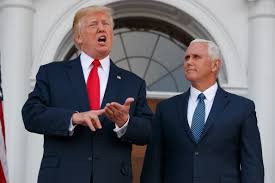 But now, in light of his failure to steal the 2020 election for the Orange Prolapse, many are speculating about whether or not our former Vice President Mike Pence suffers from urinary incontinence.  Gotta be honest here.  Until recently, I never gave much thought to the former V.P.'s pee.  But then I heard this rousing parody of the 1970's Stillers polka song.  And the trajectory of my life was irrevocably altered.

Indy ’n Anna, his wife’s name’s Karen,
He was a V.P. Pee-er.
Pissing isn’t part of cuming,
Sticking a finger up your asshole’s thumbing

Vanilla Vagina has a job to blow
a urinary party,
Pissing isn’t part of cuming,
Sticking a finger up your asshole’s thumbing
Mike Pence, Mike Pence, always on call he is the real deal
Mike Pence, Mike Pence, suppress the vote and always stop the steal
Trumpo, Trumpo, can you conceive of the fortune and fame
Make America Great, we are doomed accept your fate,
Stormy, Daniels, we’re gonna have a date.
Piss!

Da-Da-Da-Da-Ta-Da - Charge!
We're from the town with that great football team, We cheer the Pittsburgh Steelers.
Chuck Noll and all his friends are all on the field.
Go out and get them Steelers.

Bradshaw, and Rocky, and Franco and Lynn,
We love you Pittsburgh Steelers.
It's been many years in coming,
just keep that Steelers machinery humming

We're from the town with that great football team,
We cheer the Pittsburgh Steelers.
Winning's a habit, not only a dream,
Go out and get them Steelers!

Gerela's Gorrilas are here for the show,
and so is Franco's Army,
It's been many years in coming,
just keep that Steelers machinery humming.
Offense, Offense, take that football whole way up the field!
Offense, Offense, let's score and score and never ever yield!
Franco, Franco, can you believe we have a running game?
The Steelers are so great, and so hard to overrate,
Good things, will come, to those who work and wait.
Charge! 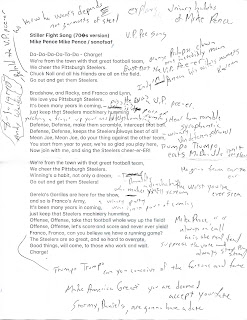 Saf, I can't believe you went to 10 Trump rallies.  Yep.  Even worse, I went to 3 Mike Pence rallies (Strip District, South Hills and a little town ironically called "Freedom" up Rt. 65).  But I didn't go inside for any of 'em.  I just didn't feel particularly welcome.

Of greater importance, how many Steelers games?  The answer: more than 175.  But less than 200.