The Orange Prolapse is promoting a new book from his former Chief of Staff Mark Meadows.

It's a peculiar move from Trump.  Because Meadows appears to be "minimally cooperating" with the 1-6 commission.

Mark Meadows, our great Chief of Staff during some very exciting White House years, has written a new book entitled The Chief’s Chief. It is available for pre-order now, and doing really well. If you want to learn about politics, truth, our great administration, and exciting achievements that took place in government, pre-order your copy now. Remember, there has never been an administration like ours. We did things that no other administration even thought they could do. The Chief’s Chief would make an incredible Christmas present, and with United States supply lines totally dead, and with thousands of ships having no way of unloading because of incompetent leadership, you will have no other thing you can buy anyway. Seriously, it’s a fantastic book, and Mark Meadows and his wonderful wife Debbie are great people.

Yawn.  As if Trump has actually read a book in his entire life.  This is the same guy who didn't know the difference between "precedent" and "president."  And that's during his reign as president.  Not a good precedent.

Oh yeah, wait a sec, I'm sure Trump'll tell you he wrote "The Art Of The Deal"... a great book that many are comparing to the holy bible due to its historical significance.

Me And My Shadow
Whispering Jack Smith 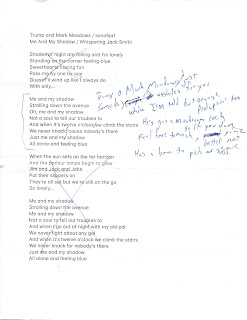 Please do not share this material with ex-Chief of Staff Mark Meadows and/or former President Donal J. Trump.