Trump's quite "busy" promoting his shtick, the big lie.

Big Michigan Rally coming up on Oct. 12th, on the Capitol steps in Lansing, where Patriots will demand a Forensic Audit of the 2020 Presidential Election Scam.  The Voter Fraud is beyond what anyone can believe.  Anyone who cares about our Great Country should attend, because unless we look to the past and fix what happened, we won’t have a future or a Country. Matt DePerno, Rep. Steve Carra, and Kristina Karamo, who I have endorsed, will be there.  Let’s Go, Michigan, don’t let us down!

One of Trump's complete and total endorsements is for Michigan Secretary of State, Matt DePerno.  Keep in mind, DePerno isn't just any ordinary lawyer.  He's a "super" lawyer.  Huzzah!

Super Lawyer Matthew DePerno is running for Attorney General in the Great State of Michigan. He has defended the Constitution for 20 years, and has been on the front lines pursuing fair and accurate elections, as he relentlessly fights to reveal the truth about the Nov. 3rd Presidential Election Scam.

Dana Nessel, the Radical Left, and the RINOs are targeting Matt because he gets results and has exposed so much Voter Fraud in Antrim County, and many more places, in the 2020 Election. He will never give up, and that’s why they absolutely cannot stand him!

Matt will properly enforce the laws for everyone—unlike what the out-of-control Radical Left Prosecutors are doing now. He will always defend our under siege Second Amendment, loves our Military and our Vets, and will restore Law and Order in the face of rampant and record-setting crime in Michigan. Matt DePerno has my Complete and Total Endorsement. He will never let you down! 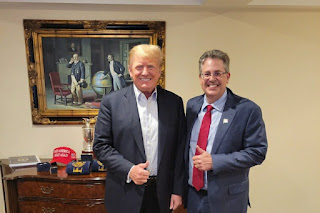 Every time some douchebag or douchebaguette poses with the Orange Prolapse, and they simultaneously imitate The Fonz, the narrative should immediately be spun as "mutually consensual, digital penetration."  Pennsylvania Senate candidate Sean Parnell comes to mind as well.  As do so many others.

As far as frozen pizza goes, we usually lean toward Red Baron and just add a few toppings.  DiGiorno's pizza is decent.  A little too crusty perhaps.  But our go-to Pittsburgh pizza is Giorgio's on the North Side.  Straight up, no nonsense za.  Highly recommended.  Now our least favorite is probably Milky Way, this kosher joint in Squirrel Hill.  Which begs the question --- who the fuck would want a kosher pizza?  You know, sausage, pepperoni, uh something known as dough.  Yeah.

Please do not share this material with Michigan Secretary of State candidate Matt DePerno and/or former President Donald J. Trump.