Just when you think it can't possibly get any worse than that obnoxious, steroided, miniaturized cunt Marjorie Taylor-Greene... well, step aside bitch!  Allow me to introduce the latest Republican abomination.  Enter the self-described Lady Trump from out West, Michelle Fiori.

Don't believe me?  'Tis the season.

The Orange Prolapse fag, whines out loud
Get on your knees
Stand tall and proud
Tried to castrate that mushroom penis he has
Pool of blood is red
Now Donald Junior’s the man

American flag waving high
Protecting it I want to die
I don't know about you man
But I'd rather die
Than live under communist rules
Let 'em go ahead and try
American flag, red, white and blue
Our government doesn't tell us what to do
If you don't like living here
Go somewhere else and stay a year
You'll be glad for what you've got
Or go to the mid-east and get shot

American flag, makes me proud
Fucking commies
I'll yell it loud
Try and take away the freedom that I have
You'll be lying dead
With a broken gun in hand 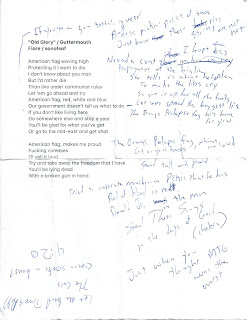 Guttermouth is a Los Angeles-based punk rock band.  They've been around since 1988 and still going "relatively Geritol strong" in 2021.  Mark Adkins is the only remaining original member.  During the past 3 decades, Guttermouth has sifted through a total of 20 different musicians.  They've even been compared to fast food behemoth "In & Out Burger."  But with the revolving musicians... not the rotisserie meats.

Please do not share this material with Nevada Gubernatorial candidate Michelle Fiori.